Mo and I arrived at Banwell just before Ivor and Sylvia to find the gate closed but unlocked closely followed by Bob and Sue in their car! Mark Lewis was next closely followed by Bandit and Mike with Pat completing the Weston lads. Pat and Sue brought in the Bristol lads and lasses consisting of Gary and Alison plus Hoppy with Bob including Phil from Gloucester area. Linda just beat the Dorset crew in with Steve, Kev, Cat and Bob and Jacquie on her newly acquired trike. Dave arrived and ordered his usual large breakfast and Kate came in later. Martyn and Lee also arrived. Then Becks and Dawn arrived having travelled from The Gloucester area as well. Most enjoyed a breakfast as cooked freshly by the congenial staff at the café. Clive and Sue also arrived as did Frank and Annette. We got us a ride out 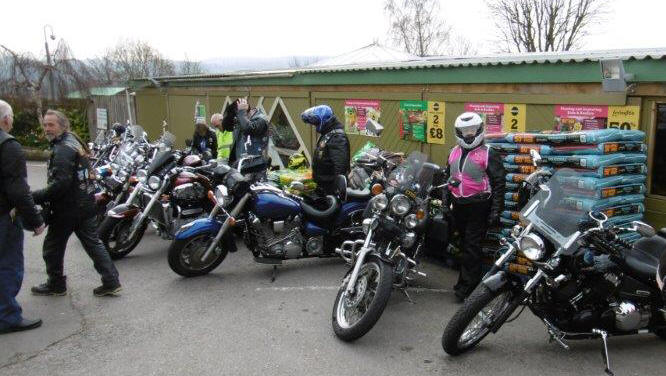 10.45 prompt and stands up from Banwell with Mo having great difficulty getting her leg over! We were ready to get to Shepton and meet Mark and Sandra having brought in the Wiltshire lads and lasses including Blackie on his trike spot on time. Also there was Bill Emery, newly married Dave with passenger Emily, Neil, Mervyn, Brian, Bill, Dave H, Archie and Sue with Roman and Posti making up the welcoming crew.

11.30 and off we go travelling to Podimore services on the A303. Matt was there as a new member. Blackie went off to the Fleet Air Arm Museum to check we were expected as planned. No problem, we parked in neat rows in the coach park which is unused at weekends! We had a total of thirty three bikes neatly lined up. 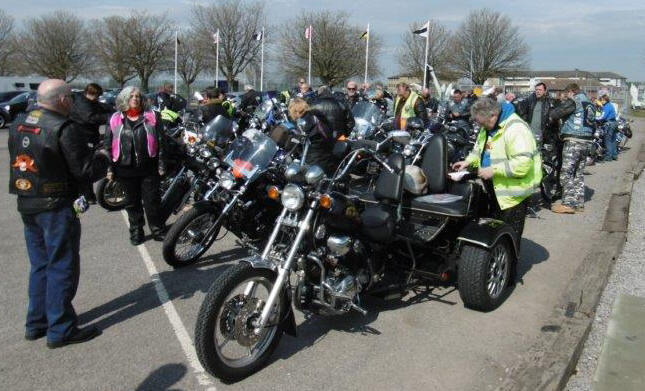 A quick photo shoot by the bikes and Blackie gave us a quick chat offering his resignation at the next AGM. There is much more to this but you have to have been there to understand and read our Clatter magazine! More pictures on the steps and the café seemed to be the most popular first stop.

We had been granted a group discount and many enjoyed a visit around the museum with Concord being a popular exhibit to view. We enjoyed the aircraft carrier experience with a fake helicopter ride on to the landing deck. There we witnessed a plane coming in to land on the superb big screen video. Back to the café for more coffee to find some had already just left and we mounted up and rode back to Weston via Somerton and the M5.

A most enjoyable day in good company and we arrived home just before the rain. Hopefully all who came enjoyed the day and have been mentioned above with thanks to Linda for a better memory than me! If you were not there you missed out on a great start to the season. Special thanks to Ivor for organizing the venue with such a good price deal.